Home / The News • The project, Climate Change Network / Reserve of rice straw for raising cattle in the highlands of Ba To

Many farmers of Hre ethnic people of the highlands of Ba To district not only know how to build sheds for confining cattle but also have a habit of developing a stack of straw to hold in reserve for cattle. That change could be seen clearly through the intervention and support of the project “Developing agriculture models adapting to climate change” in the program “Child-centered climate change adaptation in Vietnam” supported by Plan International.

The four communes of Ba Bich, Ba Dinh, Ba To and Ba Xa of Ba To district, Quang Ngai province are implementing project activities of the program “Child-centered climate change adaptation in Vietnam” supported by Plan International. Not only did the project provide support to build the sheds but also it focused on guidance and support of husbandry techniques for farmers.

The practice of building food reserves, especially reserves of rice straw for cattle in the cold rainy season, has not previously attracted special attention in the mountain region. Following practices of backward husbandry, grazing year round, building temporary sheds without roof, and feeding with only natural grass in forests and hills, each year many cattle died from hunger when the cold rainy seasons came. In addition to supporting the construction of sheds, the project has also cooperated with the local authorities to integrate and organize multiple sessions. The purpose of this is to share experiences directly with households the technical guidance of collecting rice straw, developing stack of straw and reserving food for cattle in the cold rainy season.

People rarely have practiced the habit of collecting straw to reserve food for cattle, but often burn straw in the field or discharge causing environmental pollution, even while cattle do not have enough food. To help people change their habits, the project officer organized many meetings to share experiences on husbandry, guide households how to collect and dry straw, and how to build stacks of straw efficiently to ensure the straw will not rot.

With the method of hands-on and on-the-spot guidance, the project officers went to the field to guide the ways to dry and collect straw before the harvest. When finishing the work of the rice thresher, the straw should be collected and dried. The workplace for building a stack of straw must be at high position and have drainage. Bamboo for supporting in building the stack must be strong. When building, the straw should be spread evenly and compacted. The ridge of straw stack should be covered by buckets or plastic bags to protect from rotting by rainwater. Using these methods, households can actively feed for cattle in the cold rainy season.

Mrs. Pham Thi Henh of Mang Mu village, Ba Xa commune said that she was previously accustomed to grazing buffalos on the mountain and faced the fear of they could die of cold and hunger when the rainy season comes. However, if she called them back home, there was still no food for them. From the experience of being guided in the ways to collect and dry straw by this project, in winter she can now safely bring them back to be confined in buffalo-sheds without worrying about their hunger.

Her family has four buffalos, and thanks to this approach, her buffalos this year grow relatively well and food sources are available year round. “I reserve straw twice a year, one from winter-spring and the other from summer-autumn crop. Many rural households raising buffalos not only take advantages of their straw but also offer the others to reserve”. 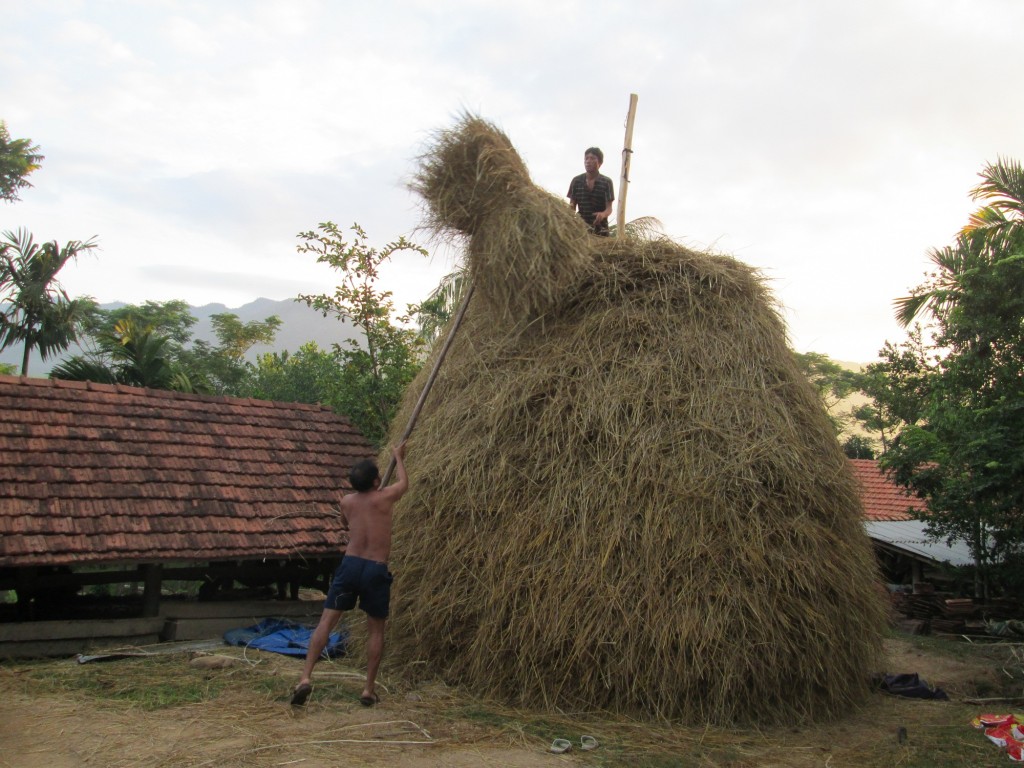 Photo: People know how to develop a stack of straw

Mr. Pham Van Don at Nuoc Lang village, Ba Dinh commune said that the local people don’t have habits of developing a stack of straw because they often graze buffalos on the mountain and rarely bring them back home. In addition, they don’t know how to develop the stack of straw according to the right way so straw often becomes rotten and mouldy and could not be used. From the time of being guided by the project in the techniques of collecting straw and developing a stack of straw, now straw are better preserved in cold season and Mr. Pham no longer worries about lack of food.

Ba To is a mountainous district with a large number of cattle. The number of cattle is currently about 64,000 head including more than 30,000 head of buffalos and cows. The number of households with 2-3 buffalos are very common here. Husbandry farmers have recognized the value of buffalos and cows so most of them make sheds to confine the animals. “Today, the propaganda is much easier and people’s perceptions on food storage and shielding sheds for cattle in winter has become a habit” – said by Mr. Pham Van Luong – Chairman of CPC Ba Dinh.

Mr. Dinh Nam Oang, Chairman of Ba Xa CPC said that “Ba Xa is one of the remote and difficult areas of Ba To and the people living here have faced many difficulties. However, the support of International Plan has helped the local people change their habits of cattle grazing and knowing how to reserve straw. This is a big change and improvement.

The initial support of the project has contributed to positive changes in husbandry practices of Hre farmers in the highland district of Ba To. People know how to raise cattle in sheds and not to graze freely, and how to reserve food to feed cattle in the rainy season, etc. These positive changes contribute to changing habits of the backward husbandry practices of Hre ethnic people, increase household income, help reduce poverty and promote husbandry development in the region.