In late June, drought seriously ravages the mountainous poor district of Ba To, Quang Ngai district, paddy fields are dry and, sun cracked; trees are withered, grass has died of water scarcity, the Lien River is out of water… Pham Thi Ret (35 years old, living in Ba Dinh commune, Ba To district) said: “It is terrible hot this year but I am very lucky to have the shed adapting to climate change. Cows and buffalos have a good place that is not only safe but also cool in summer and warm in winter. If not, they will not survive like those paddy fields. If we raise them on the mountain, they may die of lack of grass for eating“. Drought is a key problem in agricultural production of Ba Dinh commune. From April till now, it has not rained in Ba Dinh commune. Shallow wells, shallow springs and rivers and therefore, paddy rice and vegetables were at high risk of lost crops. At the year old of 35, this is the first time that Mrs. Ret witnessed such a prolonged and severe drought. In livestock, people have studied many application forms to adapt to climate change. One of the solutions widely applied to cope with extreme weather events is improving sheds to lower the negative impacts of hot waves in summer, cold extremes in winter. The sheds should be improved to enhance ventilation, elevation and covered by canvas and barricades. Previously, raising cattle in a grazing manner is an old habit of H’re people in Ba To. They often leave their buffalos in the forest for weeks or even months and only check on them a couple of times. This creates perilous conditions for theft and causes conflicts due to misunderstanding the reasons of losing cows and buffalos. Mrs. Ret said that buffalo died from cold along the stream every year because the climate was different from the past. She explained more clearly about the difference, “The winter is extreme and more cold with more frost than the past. The summer is dry, buffalos are dying of thirst after dry spring, it stop raining for such a long time. I saw the flowering paddy fields died for drought”. Besides, grazing buffalo in the forest caused disease spread and local governments can hardly manage and stop. According to Mrs. Ret, about 5 years ago very few households in Ba Dinh commune knew how to call buffalo to come back home when the sun set. Few of them built the shed then only simple with a few sketchy corrugated fences and several trees…, thus it was hot and not sturdy in summer and not strong enough to ensure safety. The poor condition follows with people in Ba Dinh commune and becomes worse when they lost buffalos and cows due to sudden disasters. 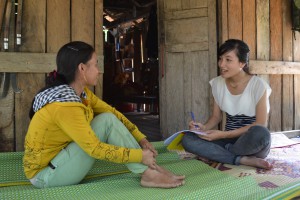 Mrs. Ret talking about the support of Plan project

In 2012, project Child-Centered Climate Change Adaptation supported by Plan Vietnam was carried out in 4 communes of Ba To district, including Ba Dinh commune. This is the first time that the local government and officers guided them about how to build climate change adaption sheds. They shared and showed successful pilot sheds to local people and made them feel confident to implement. 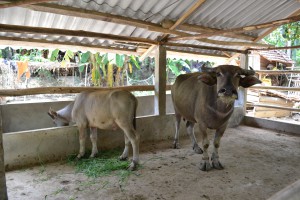 Being the poor family, after seeing the benefits of building sheds in March 2014, Mrs. Ret’s family was supported for 50% of project cost of the second phase for pilot implementation. She was excited and voluntarily contributed trees and labor force up to 1,3 million VND to build pillars. Other materials like iron, nails, cement and workers, etc., were supported by the project. Her shed was built according to the technical standards, solid, wide and sturdy. Her cattle still grew well during the long-term drought in Ba Dinh. She talked happily that the best thing she likes is that the shed has a trough for feeding and storage of food. Now, she just needs to cut grass for cattle for the whole day and then goes to work to earn more income. 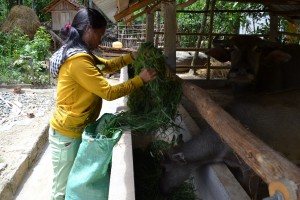 People knew that Mrs. Ret had to earn income and support two small children to go to school, but she only has two sao of land so her children and she were sometimes hungry. Moreover, in recent years, she, like many families in this commune, had poor crop yields. Now, thanks to Plan Project, two buffalos grow well while she does not need to spend too much time caring for them. “During the great drought, Ba Dinh people this year are prone to hunger.” She hopes to be funded to implement pilot growing paddy rice fields adapting to climate change. While she talked, she looked at the shed happily and hopefully with sparkling eyes.