Childhood obsession
From centuries ago, when talking about the people living in the region of An Mountain and Tra river in Quang Ngai province, people often think about the people with the virtues of patience, diligence and relentless innovation. Harsh natural conditions have “created” people with good hands and minds to overcome adversity, transformed the local region into a peaceful homeland. In the context of “changing climate”, the people of Quang Ngai apart from other Vietnamese people still keep their patience and diligence to completely overcome obstacles despite storms, flooding and severe droughts occurring everywhere. Born in such a homeland, Mr. Pham Van On, Vice President’s Council of Ba Dinh Communal People’s Committee (Ba To district, Quang Ngai province) has witnessed many heartbreaking stories caused by climate change. He was painfully sad to discover my parents, neighbors, relatives crying for imperfect grain when harvesting the crops, or dry rivers with sand during summer months, etc… At that time, he did not realize the negative impact of extreme weather events due to climate change. Mr. On only remembered during his childhood that he was sometimes hunger due to… the heaven. 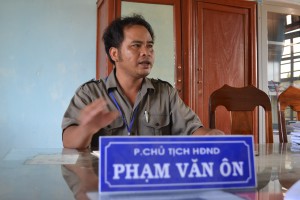 Mr. On was haunted by hunger season during his childhood due to … the heaven

In 2012, when project “Enhance children-based adaptation to climate change” was firstly funded by Viet Nam Plan International for the four communes of Ba To district, Mr. On, like many other residents in Ba Dinh commune, was very happy when his commune was one of the among beneficiaries together with the other three communes of Ba Bich, Ba To and Ba Xa. 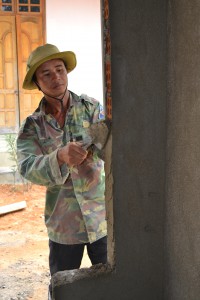 Happy when knowing that Ba Dinh is one of the beneficiaries

After that, Ba To district has carried out assessment, training, mobilization of building climate change adaptation models for pigs and cattle. Following, the steering committee of climate change project has been formed to focus the work of directing, guiding people to implement the project. Mr. On was entrusted to act as the head of Climate Change Management Board at Ba Dinh commune due to his enthusiasm and responsibilities as a vice president of People’s Council. Initially, Mr. On was a little bit surprise and confused because he has not known where to start. But after just over 3 months of working with project managers at the locality, Mr. On could do his role completely. He remembered that “Every time the commune organizes a meeting to select the poor and near-poor households, the most difficult thing is mobilizing enough number of participating households”. As the leader of the commune and on behalf of the government to work with the project, Mr.On is always worried “How to select the right households, and do not miss the family that deserves to benefit?  How to select and identify who absolutely wants to build sheds?” 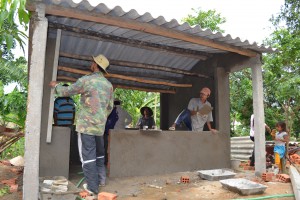 Mr. On is always hauntingly worried about how to identify households deserving support

Since not knowing where to start, so far the project has passed the second phase with families to be replicated. Thirty (30) sheds for buffalos and pigs to be built and approved are the results of the long process of both learning and management. Mr. On was patient to go and explore their feelings and aspirations. He reached out to the beneficiaries to explain to them about the benefits and significance of the contribution of families in Plan-supported projects. According to Mr. On, some households only rely on the project; they should receive more and more explanation until they understand well. Some of them do not fully contribute, and/or just contribute small trees or not good trees, etc… but they voluntarily change their minds  when listening to his sharing. 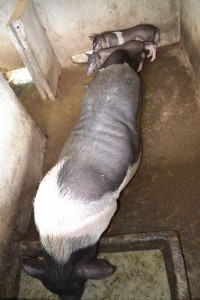 Mr. On remembered the period of 2009-2010 when the foot and mouth epidemic caused lots of pigs to die in Ba Dinh commune. Households like Pham Van Sinh (Lang Mang village) and Pham Van Rom (Nuoc Lang village)… are just a few examples of outbreak damage. Climate change adaptation sheds helps pigs and cattle have less disease and good growth due to food storage. During rainy season, people are no longer worried about moving cattle to shelters because they could develop reliably solid pillars, carefully tired roof. “Myself, work is voluntary. Monthly salary is not enough to refuel but I dare not allow myself to be disengaged because my residents are still poor and suffer from risks of climate change”. Saying so but he still rides on his poor bike to go up the hills and streams day by day to reach every mountain hamlet and village, and every house to check and promote the work of the project.