Home / Adapting to climate change • The News • The project, Climate Change Network / The most important thing is that people master the technique

Model raising Backyard Native Chicken adapting to climate change in Quang Nam province sponsored by Save the Children with the technical consultant of the Center for Rural Development in Central Vietnam (CRD) had ended about 5 months. We came back Duy Tan commune, Duy Xuyen district to visit Vo Dinh Trung household (age 62) and saw the chickens growing well and eggs being distributed to other households in the area. Mr. Trung said that “The project supported my family breed, supplies,.. and the most precious thing is being trained, guided techniques… The success that I have achieved today is because I’ve mastered and applied strictly the project technical process”.
Feelings of war invalid

Duy Tan commune is not far from My Son Sanctuary – a world cultural heritage site about 5km to the north that lies on the southern bank of Thu Bon river with many types of war damage. The commune was densely filled by many memorial sites. The commune had a total population of only 6000 but had 1500 soldiers killed in action and 129 Vietnam heroic mothers. From the past to now, this area has considered agriculture to be the key sector as the others are relatively less developed.

Like many residents in Quang land, Mr. Vo Dinh Trung (living at Thu Bon Tay village, Duy Tan commune, Duy Xuyen district) was born in the period of divided nation, dedicated with their youthful enthusiasm to the national liberation and reunification. Surviving in the war and coming back to the motherland, he was seriously wounded, having lost his leg at the battlefield and suffered many injures.

Mr. Trung is always hauntingly worried about how to improve his family’s standard of living and raise his children when his beloved wife was required to be the breadwinner. While the area along Thu Bon river has experienced vulnerabilities due to climate change, increasing floods and droughts, abnormal changes of climate as the previous pasturing is no longer adequate due to being at high risk of epidemics.

Approaching the technique
Identification of raising chicken is a popular activity, suitable for most types of rural households, especially the poor households because of low investment and easy to consume products. The project “Child-centered climate change adaptation” surveyed and developed the model “backyard native chicken adapting to climate change” in Quang Nam province.

On April 2014, the project meeting introduced its objectives and household selection criteria reached Duy Tan commune. This was the first time Mr. Trung heard about the strange concept of climate change and raising chickens adapted to climate change. But then, with the determination of constant desire to reduce the burden on his beloved, and to make “the leg disability not disable”, he registered to implement the raising chicken model of the project.

A few weeks later, a project officer came to his house to survey and evaluate his family’s capacity. To be chosen for funding for developing the model, he was supported with 50 chickens, some kinds of food, means to take care for and some materials for building a coop. Most importantly, Mr. Trung was trained and guided in the techniques for building coop, selecting the breeding, and raising chickens in accordance to adapting to climate change.

We visited his family on an early summer day after a flood earlier in the month with the outdoor temperature of 39-400C. Standing under the shady and fresh frames of gourds and Thiên Lý flower (Telosma cordata) with many coconut leaves, Mr. Trung said that “Thanks to the front playground system, the coop surrounded by 2m high fence of bamboo with B40 aerated net; vines planted on the top so it could be protected against the heat in summer, hot weather, and supply daily vegetables and fruits. This frame system helps chickens have a cool playground in harsh summer days and increase feed intake and achieve better growth. Vines frame plays a role as green food supply with additional natural vitamin and cellulose for chicken”.

In addition to completing the building coop process under the guidance of the project consultant, Mr. Trung also vaccinated with vaccine, disinfected the coop to ensure chicken agile, healthy and shiny feathers… thus its vital resistant and resistant to abnormal changes of weather are very good. On sunny days, he feeds chicken with vitamin C. He also collects waste and treats it by microbial enzymes to reduce odors and bacteria.

First season of sweet fruit
Previously, Mr. Trung’s family raised pastured chickens which themselves dig to find food. The rate of chicken deaths ranged from 30-40%, and only a few survived. Since application of the model, rate of death is very low, about 5-10%. Only after three-month raising, his chicken flock was averaging 1.5-2kg in weight, less disease with the survival rate up to 90%, rapid growth, and delicious chicken meat compared to grazing Ri chicken. From the first breeding, now his flock has divided into 3 ages including baby chick, cockerel and reproduction chicken. Until the time we visited, his flock had produced more than 200 eggs and provided two households with food , one of whom is the purchasing household.

From practical experience and lessons-learned from raising chickens, Mr. Trung concluded that “This model was being learned by many people living in the commune. In my opinion, the most important step to achieving good results was to comply with the technical requirements. Yet, during the implementation process, some households had ignored the process, had not built strong coops in accordance to the design so it resulted in low efficiency. Although this is only the “first season of sweet fruit” but in my point of view, this model could be fully replicated”. 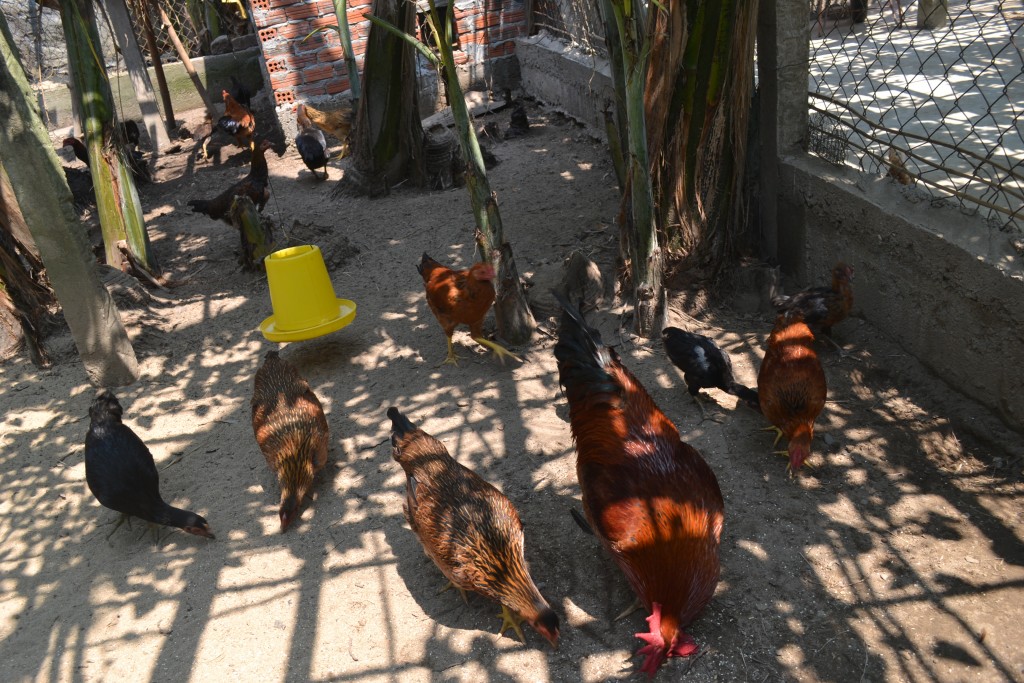 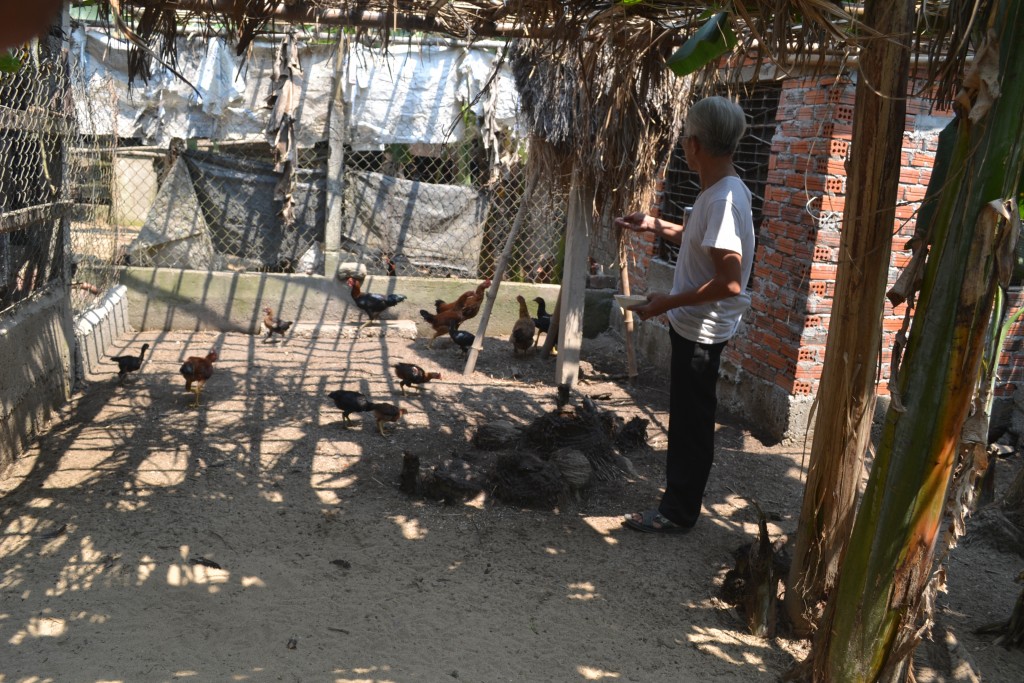 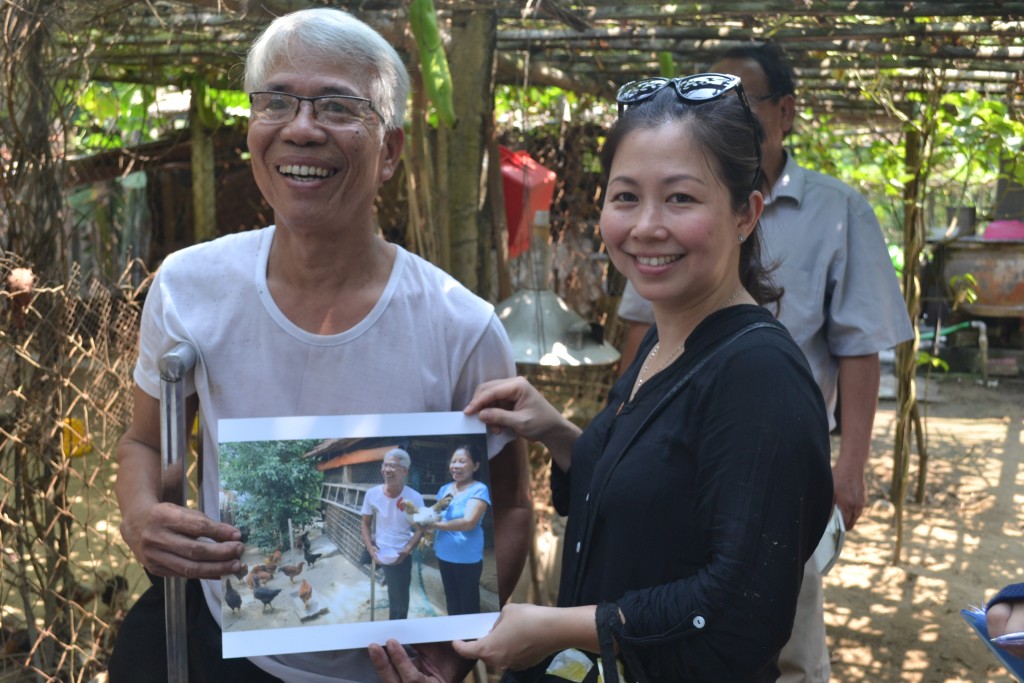 Mr. Trung is thrilled to receive an image-gift from the representative of Save the Children in Vietnam