Founded in 2012 and officially starting operation in 2014 with the support of non-governmental organizations, Plan International, to date, the Climate Change Network in the Central Region (CCN) has more than 50 members/organizations and has gradually confirmed its role and importance in making connections among, improvement of operation efficiency and influences for civil society organizations (CBOs) as well as organizations and government agencies.

CCN was established for the purpose of linking and mobilizing resources to have a hand in vulnerability reduction and resilience enhancement of the Central communities under the impacts of natural disasters and climate change.

With the aim of summative assessment and lessons-learnt of the first three quarters in 2014 and preparation for action plan in the IV/2014 and 2015, on 18 November, the meeting among Executive Board members took place at the office of Materser International, no. 48 Nguyen Chi Thanh, Hai Chau District, Danang city.

The main focus of the meeting was to exchange, share experiences to draw lessons-learnt about the work of network coordination and experience in organizing activities during the first 3 quarters of 2014.

One of the activities rated as highly successful that not only brought great influence to the community and members of the network but also contributed to communicate its voice and image to other organizations and government agencies was the event responding to the International Day for Disaster Risk Reduction 2014 held in Danang in 10 October. This event attracted special interest and was broadcasted widely in many mass media. 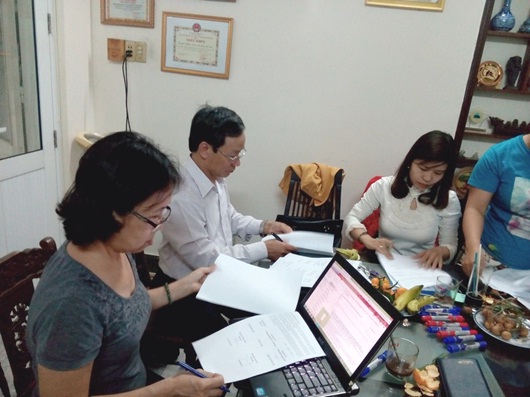 Agreement among members of Executive Board

In addition, members of Executive Board discussed and outlined the working plan for 2015, especially focused on developing ideas for fundraising for the network’s operation in the following years.

Despite many difficulties and challenges in organizing, coordinating and overcoming obstacles because CCN has just formed, the operation of CCN in the first year was successful and achieved the set objectives in 2014.

In the future, with plans and strategies clearly outlined and assigned to members specifically, the CCN will continue to assert and contribute practically to link resources among NGOs, governmental agencies and other partners working together for a common goal to help the community “Adaptation to Climate Change and Disaster Risk Reduction”.