From June, 2012 to June 2014, People’s Committee, Division of Agriculture and Rural Development, Division of Resources and Environment, Division of Forest Protection and Steering Committee of Forest Land and Forest Allocation in Tay Giang district had cooperated with Center for Rural Development in Central Vietnam and Malteser International in Vietnam to carry out distribution of 607.5ha of forest land for 90 households in two villages Atep 1 and Atep 2, Bhalee commune, Tay Giang district according to the Process of Participatory Forest Land and Forest Allocation. In this process, the participatory approach method has been applied efficiently in the whole process. This helped Tay Giang DPC overcome the difficulties of budget and manpower for the first time giving people the ownership of land that they formally live on and cultivate from generation to generation. Forest Land and Forest Allocation (FLA) to households is a pilot program to encourage conservation and sustainable use of forest resources in the framework of the project “To encourage the conservation and sustainable use of forest resources in Tay Giang district” funded by Malteser International and the Ministry of Cooperation and Economic Development, Germany from 2012-2015.

The FLA process involves seven steps includes key activities like: village meetings to get feedback from the local residents about all the activities, training professional staff, selecting and training core farmers capable of participating in the activity of reserves measurement, identifying the boundary and setting up the landmarks. Tay Giang district authorities appreciated the process and applied successfully to distribute 1,654 hectares of rubber of the district budget. In addition, the district has had plans to replicate this model for the remaining six communes in the district according to the remarks of Vice-Chairman of the DPC  – Pham A. “The process is absolutely suitable for people, capacity and policy of the State. Tay Giang district can be assured to complete the FLA task for farmers in the future”. 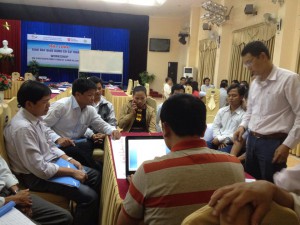 Workshop on FLA on 12 December 2014 at Danang city

In order to share experiences and get feedback on the replication and application of the process, DPC collaborated with the Center for Rural Development in Central Vietnam and Malteser International to hold a workshop on 12 December 2014 at Danang city. The workshop was appreciated and attracted special attention of many experts from agencies and non-governmental organizations in this field. In addition, participants also discussed about how to complete the Participatory FLA process. In the future, Manuals on Participatory FLA will be edited and shared with the individuals, agencies and organizations involved.